My favorite photo of my dad shows him at age 18, joyriding on a motorcycle with a pal up at the original Hollywoodland sign. His family had relocated from Kansas in the early 1920s when he was in grade school, and Los Angeles seemed like a playground to him.

Dad had lots of stories about having to quit school to help support his eight brothers and sisters. His hardest job was digging ditches all day in downtown L.A., but it allowed him to watch a studio shooting a war movie in a nearby field. He was even given a small part as a passing soldier. In order to look like a bigger army, he was asked to march in front of the camera and then run around to march by again.

Hollywood’s tricks and illusions were never much of a secret in our house. 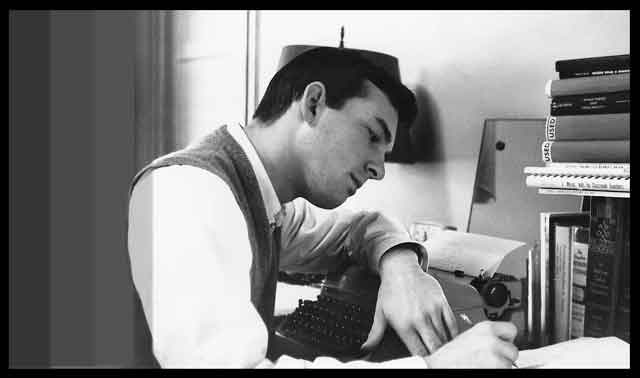 Reading about movies and how they were made became my favorite pastime. Decades later I attended high school not far from that same sign. It just said “Hollywood” by then, and it was in a sad state of disrepair.

You’d think growing up in Southern California in the era of the Beach Boys and “Little Surfer Girls” would have been enough distraction for any schoolboy. But I was always a dreamer. My mind didn’t just wander in class, it globe-trotted. I was always looking for the dramas that explained the Big Picture.

The one teacher who managed to get past the glaze in my eyeballs was Mr. Daniels. He taught U.S. history the way all subjects should be taught. He told us human interest anecdotes about the everyday people impacted by the very historical events we were studying.

The truth that we learn from art is that the more one attends to the small details, the clearer the Big Picture becomes.

That’s what I wanted to achieve in my writing. I came close to giving up on it many times. How could anyone capture the mystery of life in words on a page?

Then I remembered my dad, stealing a day from work to joyride through Hollywood on the back of a pal’s motorcycle. I felt the breeze in my hair. And I started to write.