When the Movies Were of Two Minds

The rise of nickelodeons and a motion picture industry marked the approach of the transformative glacier known as pop culture. The cultural landscape was rearranged in ways no one could have foreseen. Motion pictures were there at the vanguard, literally showing society its own reflection for the first time.

In my novel The Designated Virgin I want to take readers back to 1909 and inside the first great American film studio—The American Biograph Co. When I worked out the time frame and saw who was actually on the scene at that time I grew more and more excited. 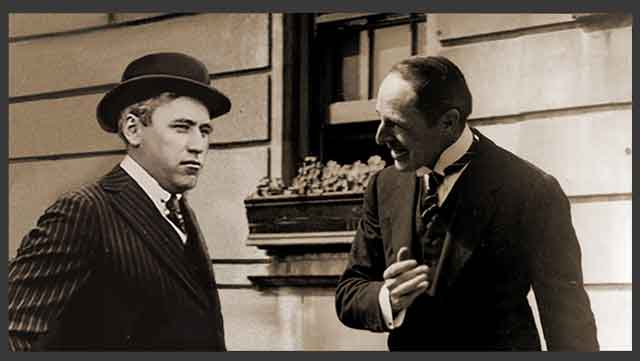 D.W. Griffith would have to be one defining presence. He had only just gotten his start as a film director and was still working under his stage name of Lawrence Griffith. While he used his theatrical experience to solve the problems of telling stories without dialogue, he was under constant pressures to turn out two short films each week. Meanwhile he was faced with budget issues, the second-guessing from front-office staff and studio owners, and his own deep fears of failing at yet another position in life. Yet most film historians discuss those years at Biograph as largely uneventful, hardly more than a resume enhancement for the artist he would become.

I sorted through others at Biograph in those months. Suddenly a name jumped out at me. Mack Sennett! I wanted to shout, “Eureka! I have a comedian!” My novel wouldn’t just be about workplace dramas and infidelities and crumbling marriages. I had a genuine contrarian.

Sennett was about as different from Griffith as a human being could be. He was Canadian by birth, a descendant of Irish immigrants who had left America when it saw opposition mounting against the rule of good King George. Mack’s ancestors, the Sinnotts and Foys, left the states and settled the new township of Richmond, Quebec. It’s small wonder he grew up predisposed to deflating social status and poking fun at codes of conduct.

No matter what sort of terror Sennett became later when in charge of his own studio, in his Biograph years he was a sweetheart, a gangly, socially awkward burlesque clown who wanted to be an opera singer until he found himself relating more to the hooligans on the Bowery. His Keystone Cops were a natural outgrowth of his personality, which found amusement in kicking the pretension out of authority whenever possible.

Together, Sennett and Griffith were central to what American movies were to become. They may have been worlds apart psychologically, but as a team they trail-blazed all the major commercial genres, from gangster films and situation comedies to slapstick farce and chase thrillers.

There is a blog about them on my author’s site—“When the Movies Were of Two Minds.” They complemented one another at the beginning, but in just four short years they had to go their separate ways and establish their own studios. They will stand forever as the prototype for all the “artistic differences” to come in what would be known as Hollywood.